I must have been about eleven years old when my brother pulled a book off the shelf and took it outside to read a poem that immediately captivated me. Although it was a bright and sunny day in Southern California and we sat in the shade of an orange tree, I was carried to a dark and dank chamber where I saw a frightening apparition atop a bust of Pallas Athena mouthing the word, “Nevermore.” Of course the poem was “The Raven” by Edgar Allan Poe. Just a few years later, I would meet Poe again when a high school English teacher assigned “The Tell-Tale Heart.” Those two events turned me into a fan of Poe for life.

Over Memorial Day Weekend, I attended Balticon, a science fiction convention in Baltimore. The convention was held at the Renaissance Baltimore Harborplace Hotel, which is just around the corner from the place on Lombard Street where Poe was found “in great distress” by Joseph W. Walker on October 3, 1849. It’s not entirely clear what Poe was doing in Baltimore or why he was outside the public house on Lombard Street where Walker found him. What is known is that Poe died in the hospital just four days later at age 40. He was then buried in an anonymous grave at Westminster Hall. In 1865, a movement began to create a more fitting memorial for Poe and by 1875, that culminated in the creation of the Poe Memorial at Westminster Hall where Poe is now interred along with his wife and mother-in-law. While in Baltimore, my friend Nicki Fatherly took me to see the Poe Memorial.

Poe’s interests were far-ranging. He wrote criticism, contemplated scientific discovery, imagined detectives, and was fascinated by the darker sides of human nature. He wrote poetry, essays, and prose. That range has influenced me to explore many topics and forms in my writing. Because of Poe, and authors he influenced such as Ray Bradbury, I’ve felt encouraged to write science fiction, horror, and fantasy. It’s why I write poetry, short stories, and novels. I’ve even written a few reviews. I was glad to visit Poe’s memorial in Baltimore and pay tribute to a man who continues to influence so many over a century and half after his mysterious and untimely passing.

Last week, I discussed the man who shot Billy the Kid, who is buried in the cemetery behind my house. It turns out there’s a gravestone for the man who defended Billy the Kid at his trial as well.

This one’s an interesting gravestone in that no one is actually buried under it. Albert Fountain and his son disappeared in 1896 and to this day, no one knows what happened to them.

Albert Fountain’s career started during the Civil War, when he was a sergeant in the Union Army’s California Column, which took New Mexico back from the confederacy in 1862. After the war, he moved to El Paso, Texas and became a Republican politician at a time when it was not popular to be a Republican in Texas. He served in the Texas State Senate and served as Lieutenant Governor for a time. His views angered many Texas Democrats and he was challenged to several duels. Some suspect his unpopular politics may have played a part in his disappearance some thirty years later.

He returned to Mesilla in 1873 and opened a law practice, making use of his fluency in Spanish. He also founded a newspaper called The Mesilla Independent in 1877. He defended Billy the Kid in 1881, but lost the case. Fountain would continue to be involved in the Lincoln County troubles until his disappearance. He disappeared near White Sands on his way home after bringing charges against Oliver M. Lee and William McNew, who were accused of altering cattle brands. All that was found of Fountain and his son was the buckboard wagon they rode.

Fountain makes a cameo appearance in my novel The Brazen Shark.

In the novel he defends farmhand Billy McCarty and newspaperman Luther Duncan. They’re accused of breaking jail, which they did at the end of Lightning Wolves. Fountain is interested in the case because he sees it as the army trying to interfere with freedom of the press. In another play on history, although I never expressly say Billy McCarty is Billy the Kid, it is suggested. So, the novel presents an alternate version of the famous trial.

In this case, walking through the cemetery introduced me to a mystery that caused me to dig a little deeper into the history of the region. I found some interesting connections that made a good story, though I fear no solutions to this unsolved mystery.

Last week, I had the opportunity to speak to a local high school class here in Las Cruces about the steampunk genre and my writing process. One of the things I mentioned is that I like to take walks through the cemetery. Now this may seem a little morbid, but I find one effect is that it puts me in touch with local history. I see gravestones and I ask who these people were and what they did. One tombstone that regularly catches my eye belongs to Mr. Charlie Miller. 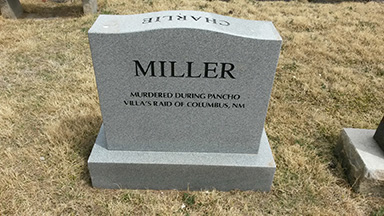 In this case, I haven’t researched Mr. Miller, but the tombstone goes to show how iconic Pancho Villa is in the Southwestern United States. His raid on Columbus, New Mexico led to America’s first incursion on another country in which we used air power.

When Robert E. Vardeman asked if I would be interested in contributing to his “Empires of Steam and Rust” series which presents an alternate 1915, the first thing that came to mind was Pancho Villa, John Pershing and the use of airplanes. In this alternate history, the Wright Brothers never made their famous flight at Kitty Hawk, North Carolina. Instead, America’s air power rested in Zeppelins. So I asked what if Pancho Villa found a new way to fight such cumbersome aircraft? This became the foundation of my novella Revolution of Air and Rust.

As it turns out, Revolution of Air and Rust just got a really nice review by Neal Wilgus in the magazine Pablo Lennis.

Here’s an excerpt: “…Villa stumbles into a portal into a parallel Earth, which not only saves his bacon but allows him to return to his home world with a flying machine equipped with machine guns. That’s the basic situation in this fast moving and gripping story by David Lee Summers&hellip…”

You can find copies of Revolution of Air and Rust at Amazon, Barnes and Noble, and Smashwords.