I must have been about eleven years old when my brother pulled a book off the shelf and took it outside to read a poem that immediately captivated me. Although it was a bright and sunny day in Southern California and we sat in the shade of an orange tree, I was carried to a dark and dank chamber where I saw a frightening apparition atop a bust of Pallas Athena mouthing the word, “Nevermore.” Of course the poem was “The Raven” by Edgar Allan Poe. Just a few years later, I would meet Poe again when a high school English teacher assigned “The Tell-Tale Heart.” Those two events turned me into a fan of Poe for life.

Over Memorial Day Weekend, I attended Balticon, a science fiction convention in Baltimore. The convention was held at the Renaissance Baltimore Harborplace Hotel, which is just around the corner from the place on Lombard Street where Poe was found “in great distress” by Joseph W. Walker on October 3, 1849. It’s not entirely clear what Poe was doing in Baltimore or why he was outside the public house on Lombard Street where Walker found him. What is known is that Poe died in the hospital just four days later at age 40. He was then buried in an anonymous grave at Westminster Hall. In 1865, a movement began to create a more fitting memorial for Poe and by 1875, that culminated in the creation of the Poe Memorial at Westminster Hall where Poe is now interred along with his wife and mother-in-law. While in Baltimore, my friend Nicki Fatherly took me to see the Poe Memorial.

Poe’s interests were far-ranging. He wrote criticism, contemplated scientific discovery, imagined detectives, and was fascinated by the darker sides of human nature. He wrote poetry, essays, and prose. That range has influenced me to explore many topics and forms in my writing. Because of Poe, and authors he influenced such as Ray Bradbury, I’ve felt encouraged to write science fiction, horror, and fantasy. It’s why I write poetry, short stories, and novels. I’ve even written a few reviews. I was glad to visit Poe’s memorial in Baltimore and pay tribute to a man who continues to influence so many over a century and half after his mysterious and untimely passing.

In my craft or sullen art
Exercised in the still night
When only the moon rages
And the lovers lie abed
With all their griefs in their arms,
I labor by singing light

These are the opening lines of the poem “In my craft or sullen art” by Dylan Thomas. I’ve long thought they beautifully express what its like when a writer, and particularly a horror writer, is developing a story or a poem. I turned to these lines when I was looking for a title for a collection of short stories and poetry I published back in 2001.

When Only the Moon Rages is a collection by Wayne James.

There are stories about creatures of the night, people of the stars, and individuals who dare to live in those dark places few have the audacity to tread.

One story features Lieutenant Lawry, an ordinary soldier on an alien world who must fight to keep an unknown, violent creature from killing his men. In another story, Sergeant Frank Blacklin strives to keep children alive against insurmountable odds on a hostile planet. Turning his attention to Earth, Wayne James tells the story of Robert, a man who lives in a nightmarish United States gone mad, where the enemies of the State are so numerous, their bodies are pushed into a gaping trench.

Other stories are set in the present day. In one, a respectable businessman falls for a woman turned on by crime. In another, a lonely man deals with the odd neighbors down the street by buying an assault rifle. It’s clear to me Wayne James spent many hours honing his craft “when only the moon rages.” The result might be expressed in one of his own poems:

Although the collection is fifteen years old now, I think there’s still a lot of relevance in Wayne’s writing. I hope you’ll join me on a journey to the land when only the moon rages. The collection is available at Amazon.com and Hadrosaur.com

This past weekend saw the release of Popcorn Press’s seventh annual Halloween celebration of horror poetry and short fiction, Zen of the Dead.

The collection includes two of my haiku and one of my tanka. One of my haiku was inspired by this past summer’s trip to New Orleans. The tanka takes inspiration from my “day” job operating telescopes at Kitt Peak National Observatory.

Each year, on October 1, Popcorn Press hosts an open call for horror-themed poems and stories. By October 31, they have a finished document published in ebook form, with a print version close on its heels.

This book is the result of that creative marathon. Inside are works from writers new and old, pros and newcomers alike. Some few are previously published pieces deserving new readership; the majority have never before seen the light of day. In addition to my work, you’ll find poems by such Tales of the Talisman contributors as Gary W. Davis, F.J. Bergmann, David C. Kopaska-Merkel, Kelda Crich, Deborah P. Kolodji, Christina Sng, and Dwarf Stars winner, Greg Schwartz. I was also thrilled to see Stephen D. Sullivan among the contributors. He wrote Heart of Steam and Rust which is one of the stories in the Empires of Steam and Rust steampunk series that I’ve also contributed to.

Editor Lester Smith’s goal each year is simple: to encourage a wider audience for poetry and short fiction. Halloween provides a perfect opportunity.

Zen of the Dead, then, is the result of Popcorn Press’s month-long Halloween party—though you are welcome to read the contents at any time of the year, ideally after dark…alone. (Or perhaps with a friend or two for company, to stave off the chills.)

Zen of the Dead is available at Amazon and directly from Popcorn Press.

This is the fourth Popcorn Press anthology I’ve contributed to. You can also find my work in Vampyre Verse, The Hungry Dead, and Halloween Haiku.

Most of the vampire flash fiction in the collection Blood Sampler started life as stories written for a little zine called Blood Samples edited by Kate Hill and Portland Elizebeth. When I first saw the guidelines, I thought they were looking for vampire stories of 1500 or fewer words. I started thinking about stories, then I read the guidelines again. I saw they wanted stories of 150 words or less! My first thought was no way! My second thought was, how hard is it to write 150 words? I decided to give it a try. I came up with three very short stories, sent them off, and they were accepted that afternoon. I think they hold a personal record for the shortest time between story conception to creation to sale of any of my works.

As it turns out, I went on to place stories in every issue of the zine during its two-year run. Through that time, I also became well acquainted with work by fellow contributor Lee Clark Zumpe. I enjoyed playing with ideas and trying them out in short form. One story I’m particularly fond of appeared in the “Special Romance Issue” in March 2003. I present it here with the illustration by Marge Simon that accompanies it in the new edition of Blood Sampler.

The Lady of the House

Trevor sought refuge from pouring rain in the Victorian manor house. The lady of the house offered him wine to warm his blood and a soft bed for the night. Once Trevor was cozy in the warm bed, the woman entered his room, pulled back the blankets and bit into the traveler’s neck, reveling in the sweet taste of his blood.

Late the next afternoon, Trevor found the vampire’s crypt. He crept up to the coffin and threw back the lid, revealing the vampire. He gazed at her smooth skin, untouched by time. Her eyes closed, the woman looked peaceful, not like the creature that attacked him the night before. Trevor knew he must act before he lost his courage…

Later, the vampire awoke in the velvet-lined darkness of her coffin. Slowly, she lifted the lid and smiled when she saw a vase, filled with a dozen blood-red roses.

As it turns out, I decided to play with this idea in the form of a structured poem to see where it would lead me. The result was a Villanelle I wrote for the Science Fiction Poetry Association’s 2010 On-Line Halloween Poetry Reading. If you click the link, you can hear me read it. Here it is written out:

The heart, life will sustain
Blood flows like a river
There, a vampire’s domain

A lady does remain
In that house out yonder
The heart, life will sustain

He sought escape from rain
In the ancient manor
There, a vampire’s domain

With wine, she would detain
The wet, weary traveler
The heart, life will sustain

Sweet blood flowed from his vein
As he lay near slumber
There, a vampire’s domain

From stake, he would refrain
Roses, he would leave her
The heart, life will sustain
There, a vampire’s domain

I hope you’ll join Lee Clark Zumpe as we play with words in Blood Sampler. It’s available in print at the Alban Lake Store or as an ebook at Smashwords.

Just before Memorial Day, my in-laws stopped for a visit. They brought a wonderful surprise along with them, a lovely vinyl figure of Bela Lugosi as Dracula. The figure is nearly two feet tall and shows Dracula from the scene in the 1931 film where he says “Listen to them. Children of the night. What music they make.” 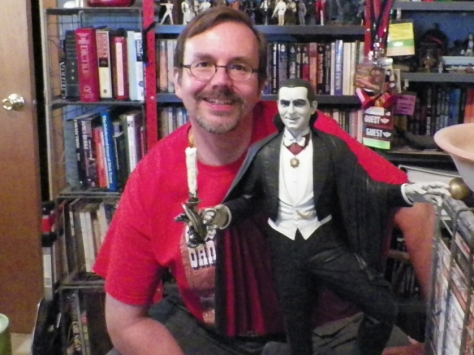 I did some research and discovered that this Dracula figure came from a kit produced by sculptor Tony McVey and licensed through the Bela Lugosi estate. Tony McVey is probably best known as the lead sculptor for Star Wars: Return of the Jedi.

According to paperwork that came with the figure, the kit was one of two assembled and painted by a fellow calling himself Monster Man. It is a lovely figure and really feels like Bela is about to deliver his famous line, then turn and continue up the stairs.

One aspect of this particular scene that has always amused me is that just before Dracula appears, we find that his castle deep in the Carpathian mountains is haunted by armadillos and opossums! I gather that Tod Browning, who was a native Texan, liked to put animals from home in his movies. 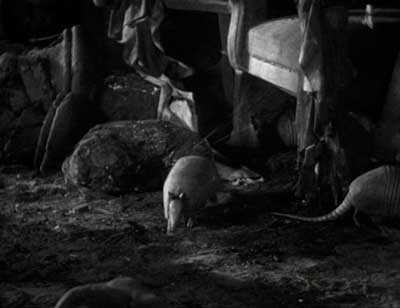 As it turns out, this scene inspired me to write a poem. You can hear me read the poem at the Science Fiction Poetry Association’s 2009 Halloween Reading Page. Just scroll down to “The Armadillos of Castle Dracula.”